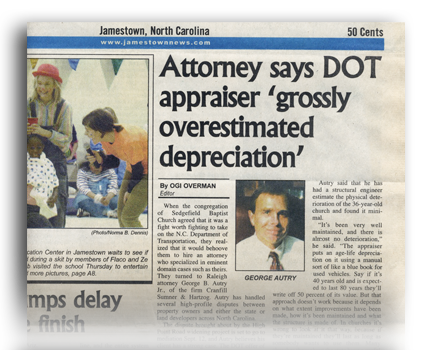 When the congregation of Sedgefield Baptist Church agreed that it was a fight worth fighting to take on the N.C. Department of Transportation, they realized that it would behoove them to hire an attorney who specialized in eminent domain cases such as theirs. They turned to Raleigh attorney George B. Autry Jr., of the firm Cranfill Sumner & Hartzog. Autry has handled several high-profile disputes between property owners and either the state or land developers across North Carolina.

The dispute brought about by the High Point Road widening project is set to go to mediation Sept. 12, and Autry believes his client has a strong case. The DOT offer of just over $950,000 for the five-acre parcel of land and the two structures totaling 10,000 square feet, he claims, is grossly unfair for two reasons.

“The DOT offer is not realistic in terms of replacement cost of the church,” he said Fri., March 11. “But more importantly, the department is willing to pay only about 50 cents on the dollar because their appraiser depreciated the church by 50 percent. It would cost more to replace the church than the department said it would, plus they grossly overestimated the depreciation. Those two things add up to quite a discrepancy.”

Autry will argue before mediator Thomas Duncan that churches fall under a “special use” category of properties in terms of both depreciation and fair market value.

“Because they are not bought and sold on the open market the way properties are customarily bought and sold, the law recognizes that churches are a ‘special use,’ he said. “But the state has not estimated fair reproduction cost, nor has it depreciated it fairly.”

Autry said that he has had a structural engineer estimate the physical deterioration of the 36-year-old church and found it minimal.

“It’s been very well maintained, and there is almost no deterioration” he said. “The appraisal puts an age-life depreciation on it using a manual sort of like a blue book for used vehicles. Say if it’s 40 years old and is expected to last 80 years they’ll write off 50 percent of its value. But that approach doesn’t work because it depends on what extent improvements have been made, how it’s been maintained and what the structure is made of. In churches it’s wrong to look at it that way, because if they’re maintained they’ll last as long as somebody wants to use them. Many churches throughout the state have a useful life of over 100 years.”

The attorney also said that the conventional definition of “fair market value” does not apply in this instance.

“‘Fair market value’ is what a willing buyer and a willing seller would take,” he said, “and we don’t have that here because churches are not bought and sold on the open market. So the question should be what is a fair reproduction cost. What matters to a congregation is a place they can go back to and call home. So basically the question is what would it take to replace what they lost through no fault of their own.

“The law allows us the opportunity to get compensated fairly; it’s just a shame that DOT made them go through this rather than stepping up and doing it in the first place.”

In addition to Sedgefield Baptist, Autry is representing around a dozen other property owners along the path of the Jamestown bypass/High Point Road widening project. Roughly 160 parcels of land will be affected by the $41 million, 4.381-mile project.

According to the website www.ownerscounsel.com, among the similar cases Autry has argued are:

• Obtained $11,900,000 for a Wake County property owner whose Raleigh property was acquired by the city in order to consolidate city services, including maintenance and parks and recreation.

• Obtained a jury verdict of $2,533,364 including interest, for a Durham County hotel owner originally offered $291,000 for the taking of approximately .6 acres of land.

• Obtained a jury verdict of $2,558,031.12, including interest, for an Alamance County landowner originally offered $400,800 for a partial taking of his property.

The verdict continues to be the largest of any kind in Alamance County history.

While not discussing specific dollar figures of this case, Autry did say that the “over $2 million” figure Mentioned by Sedgefield Baptist minister, Rev. Deryl Holliday, in a previous interview with the Jamestown News, was accurate.

“I have no problem saying the church is worth over $2 million, not counting the land,” he said. “It’s no secret we believe it would cost considerably more than what the department offered to replace the church.”