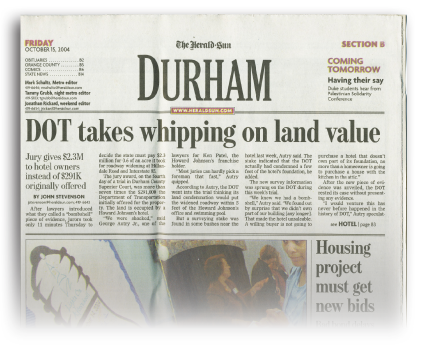 After lawyers introduced what they called a “bombshell” piece of evidence, jurors took only 11 minutes Thursday to decide the state must pay $2.3 million for 0.6 of an acre it took for roadway widening at Hillandale Road and Interstate 85.

The jury award, on the fourth day of a trial in Durham County Superior Court, was more than seven times the $291,000 the Department of Transportation initially offered for the property. The land is occupied by a Howard Johnson’s hotel.

“We were shocked,” said George Autry Jr., one of the lawyers for Ken Patel, the Howard Johnson’s franchise holder.

“Most juries can hardly pick a foreman that fast,” Autry quipped.

According to Autry, the DOT went into the trial thinking its land condemnation would put the widened roadway within 5 feet of the Howard Johnson’s office and swimming pool.

But a surveying stake was found in some bushes near the hotel last week, Autry said. The stake indicated that the DOT actually had condemned a few feet of the hotel’s foundation, he added.

The new survey information was sprung on the DOT during this week’s trial. “We knew we had a bombshell,” Autry said. “We found out by surprise that we didn’t own part of our building [any longer]. That made the hotel unsaleable. A willing buyer is not going to purchase a hotel that doesn’t own part of its foundation, no more than a homeowner is going to purchase a house with the kitchen in the attic.”

After the new piece of evidence was unveiled, the DOT rested its case without presenting any evidence.

“I would venture this has never before happened in the history of DOT,” Autry speculated.