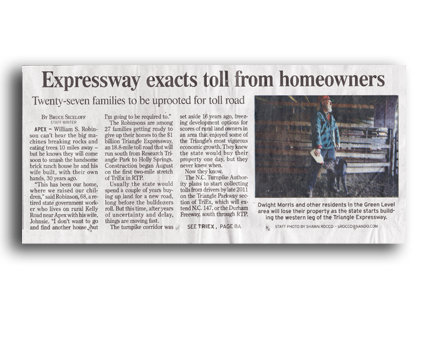 William S. Robinson can’t hear the big machines breaking rocks and eating trees 10 miles away – but he knows they will come soon to smash the handsome brick ranch house he and his wife built, with their own hands, 30 years ago.

“This has been our home, where we raised our children,” said Robinson, 68, a retired state government worker who lives on rural Kelly Road near Apex with his wife, Johnsie. “I don’t want to go and find another house, but I’m going to be required to.”

The Robinsons are among 27 families getting ready to give up their homes to the $1 billion Triangle Expressway, an 18.8-mile toll road that will run south from Research Triangle Park to Holly Springs. Construction began in August on the first two-mile stretch of TriEx in RTP.

Usually the state would spend a couple of years buying up land for a new road, long before the bulldozers roll. But this time, after years of uncertainty and delay, things are moving fast.

The turnpike corridor was set aside 16 years ago, freezing development options for scores of rural land owners in an area that enjoyed some of the Triangle’s most vigorous economic growth. They knew the state would buy their property one day, but they never knew when.

The N.C. Turnpike Authority plans to start collecting tolls from drivers by late 2011 on the Triangle Parkway section of TriEx, which will extend N.C. 147, or the Durham Freeway, south through RTP. In late 2012, cars will be rolling all the way south to Holly Springs on the main part of TriEx, an Outer Loop extension called the Western Wake Freeway.

But until July, there was no money available for buying up the right of way – and, for that matter, no guarantee that TriEx would even be built. Then the Turnpike Authority secured a federal loan and sold bonds to pay for the whole thing, and the starting bell was sounded.

Most of the Triangle Parkway land was already available, a gift of the Research Triangle Foundation. So the Turnpike Authority started work in RTP and sent its appraisers and purchasing agents south ahead of the construction crews.

This fall and winter they’re making offers to the owners of more than 200 properties – mostly vacant land – in the path of TriEx. The Turnpike Authority set aside $228 million, roughly a quarter of the project cost, to buy 525 acres and cover other right-of-way expenses.

Some landowners have agreed to sell, and a few rental tenants have been hustled to new homes, cutting off income to landlords before the state gets around to buying the houses. “They jumped the gun and vacated my tenant,” said Deborah J. Nunn, 56. She’s making payments on a Kelly Road rental house while she negotiates with the Turnpike Authority on a purchase price. “I’m in favor of 540, but I’m not in favor of losing $1,500 a month while they make up their mind.”

If landowners don’t like the state’s offer, the fast construction schedule allows little time for haggling.

“Normally there would be some back and forth,” said George Autry Jr., a lawyer representing several landowners affected by the TriEx project. “But they’ve had to say, ‘If you can’t take our number quickly, we’ve got to file for condemnation on it.'”

Turnpike officials say they will begin exercising the state’s power of eminent domain in the coming weeks, when they file the first batch of condemnation papers and take title to 11 tracts they need. The former owners will be paid what the state deems fair-market value, with the final purchase price to be settled in court.

The turnpike will slice through piney woods and pastures that have been insulated from western Wake County’s brisk development since 1993. That’s when the state took steps to preserve a 300-foot-wide swath of land for what was planned as a toll-free leg of the Outer Loop. Construction was pushed back twice. The project was reborn in 2005 as a toll road.

Faded barns and dirt driveways mark the TriEx corridor; in some places it is unmistakable in satellite photos – a green band pressed on both sides by rooftops and parking lots. “Folks that own property certainly were aware there was a time coming when this would happen,” said Steven D. DeWitt, chief engineer for the Turnpike Authority.

John M. and Lorraine Kane built their house on 62 acres of farmland along Roberts Road near Cary in 1990. Three years later they learned of plans to build a six-lane expressway through their front yard, with a grassy median where their house now stands. They’ve been in a kind of limbo since then. “Nobody’s going to buy it when it’s in the path of the super-slab,” Autry said. “Yet they cannot develop it.”

John Kane, 61, is retired from an auto service business. Lorraine Kane is 59, with serious health problems that cut short her career as a schoolteacher. Soon the Turnpike Authority will condemn their land and make them millionaires. The state’s latest offer is a little over $4 million for their house and 22 acres, Autry said. The final price will depend partly on how much economic damage is caused to their 40 acres of farmland.

When the state takes their homes, residents will have 90days to move out. Judy and Roy Howell will lose about 10acres on Green Level Road near Cary, along with the house they’ve shared for 36years. They’re still negotiating with the Turnpike Authority, but they have already started looking for a new home nearby.

“I must say that when you haven’t looked at property prices in a long time, it’s definitely a shell-shock when you go out there,” said JudyHowell, 61, a retired IBM worker. “The Green Level area is a lot more expensive than it was when we first moved out here.”

William Robinson shares a driveway on Kelly Road with his neighbor, Royal T. Jones Jr. Both houses, built in 1979, are on the TriEx hit list.

“The reason we built these houses on the same driveway is that my neighbor Jones married my sister, and we were close,” Robinson said. “We shared a lot here. There’s a little sentimental value.”

He figures he’ll be in his house through one more winter. He hasn’t looked for a new place to live, because he doesn’t know how much money he’ll have to spend.

“That depends on how much they give me for this one,” Robinson said.