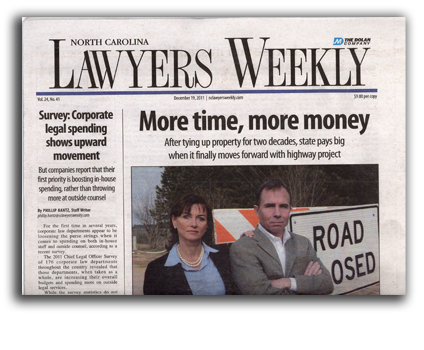 William Sanders was not yet 60 years old when the state Department of Transportation first identified his 700 acres as being in the path of the planned Fayetteville outer loop highway.

This November, his lawyers, George and Stephanie Autry, finally settled the state’s claim on his property for an unprecedented $15.8 million. Sanders is now 78.

Though he received a fair price, Sanders suffered from the passage of time. For close to 20 years he was deprived of the use and enjoyment of his property, prohibited by state law from selling, developing or disposing of it as he wished.

The state suffered too, Stephanie Autry said. “From the time Mr. Sanders came to us to the time we resolved the case, many things happened to him and also to the property. If DOT had filed condemnation when we first requested it to in 2004, the state would have saved millions of dollars.”

Sanders is a casualty of the state’s Map Act, which allows the DOT to file with the local register of deeds a map identifying property where it anticipates putting a road and, with that, protect all property along the corridor from development. While the act imposes some general time limits upon the DOT and provides a limited avenue of relief for property owners, in practical terms it freezes the identified property until DOT decides otherwise.

“There are hundreds of people out there facing the same situation,” George Autry said. “They all unfold differently, but what you typically have in all these cases are property owners being  paralyzed, for years and years people like Sanders, middle-aged or older, with land that’s been in the family for a long time. They’re not necessarily rich, even though they have the land, so they’re not people who can afford for this to happen to them.”

The 700 acres Sanders owned fell within the Fayetteville city limits, adjacent to Fort Bragg and  near the intersection of two major roads. The land had been the family farm for close to 100 years.

In 1991, DOT filed a map with the register of deeds’ protecting land in the I-295 corridor, including his, from development. Ten years passed, with no road in sight.

“When Mr. Sanders came to see us in 2001, he was in his late 60s and on a fixed income. He had no family and was deep in debt from paying the taxes on the property,” George Autry said. “The project was supposed to move forward with the right of way, and it just kept getting delayed and delayed. ”

In 2004, Autry filed a request for an advance acquisition by DOT. “This is where you say look, you are going to be taking my property but aren’t ready to take it, and I am in hardship so I need you to advance the process,” he said. The DOT did not disagree with Sanders’ plight, but said there was no need to go forward with that request, as the Department was moving forward with the project.

That didn’t happen in 2004, or the years after. Finally in February 2008, DOT appraised the property and told Sanders that an offer of $4.8 million would be coming. “For Mr. Sanders, this looked like the beginning of his being able to climb out of debt,” George Autry said. But then the Department realized it had miscalculated the area to be taken, so a new appraisal had to be done.

“March became May became September, and still no number. And Mr. Sanders is desperate,” Autry said.

In October, a new appraisal came in at $6.5 million; But before an offer was finalized, Lehmann Brothers collapsed, the national economy teetered, and DOT, in November 2008, shut down all acquisitions.

“DOT stayed in this frozen state for several months into the spring, 2009,” Autry said. “And then it decided the project was not going to be needed until 2014.”

The Autrys made another request for an advance acquisition, but the DOT said it didn’t have the funds.

Then, out of the blue in August 2010, the Autrys got a call from DOT. “I remember where we were, driving on [state highway] 98 crossing the lake,” George Autry said. “The DOT said it had some money it needed to spend and was going to go ahead and file condemnation on the Sanders claim. This meant that they were going to go ahead and put the money into court so that they would have access to the land. We’d continue to disagree about the price, but Mr. Sanders would at least have access to the money. At that point his debt from taxes on the property had risen to $3 million.”

DOT filed its condemnation complaint and deposited the money in court in August 2010. The parties litigated the issue of property value over the following year, with DOT claiming, unsuccessfully, that a small parcel across the road from the condemned tract was environmentally contaminated and diminished the value of the rest of the acreage.

“We were prepared to ask for $29 million at trial,” Autry said. “This was 700 vacant acres within the Fayetteville city limits, with water and sewer, immediately adjacent to Fort Bragg, with 60,000 people driving by it every day. It was incredibly valuable property. ”

The parties settled in November for $15.8 million.

The fact that it took 20 years for Sanders to be justly compensated suggests, at best, a statute that overreaches.

Once DOT files a map, any request from a property owner to develop, subdivide or change his property is automatically denied. “That’s because DOT does not want people building Walmarts, or McDonalds, or houses for that matter, that it will end up having to pay for,” George Autry said.

“So what you have is a property owner who is basically stuck.”

And it’s not just large tracts that are affected. “We represented a middleaged couple who, when the wife was diagnosed with breast cancer, tried to modify their home,” he said. “They wanted to put a bedroom downstairs, once she developed stage four lung cancer, and they could never get a permit, because the property was protected by the Map Act. They wanted to put in a swimming pool so she could have therapy, but couldn’t do it.”

The Map Act does provide that if a property owner files plans and requests a permit, once that permit is denied, the DOT must step up and acquire your property within three years, or release it.

But that relief has little practical effect.

First, the property owner has to spend time and money getting plans together, knowing that his request is going to be denied. Then he has to wait for three years from the denial. And once his property is released, no one wants it. “The reality is that you may get technically released, but the map is still down at the courthouse, and no bank is going to lend any money on a large scale  project, and nobody in their right mind would take their good money and build something in the way of the project. So you’re in all respects paralyzed,” Autry said.

After some unsuccessful attempts over the years to change the act, the legislature this year amended the section dealing with property owner relief, but only insofar as it made the permit process less encumbering and less expensive. The practical effect remains the same, according to Stephanie Autry. No one is going to touch the property while DOT is contemplating the project.

“People come to us and ask all the time, ‘What’s the problem? Is it that the DOT low-balls all the time?’” George Autry said. “I worked over there for seven years. They’re great people, and they don’t set out to low-ball. The biggest injustice is when DOT puts a plan out there, and says they’re going to study it for 10 or 15 years. It just wipes people out. And that is the thing that needs to be changed.”

Representatives from the DOT did not respond to a request for comment. Noelle Talley, public information officer for the Department of Justice, confirmed the settlement amount. Attorneys  from that office who represented the DOT were unable to comment.