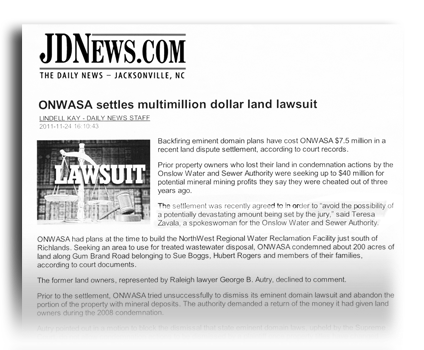 Prior property owners who lost their land in condemnation actions by the Onslow Water and Sewer Authority were seeking up to $40 million for potential mineral mining profits they say they were cheated out of three years ago.

The settlement was recently agreed to in order to “avoid the possibility of a potentially devastating amount being set by the jury,” said Teresa Zavala, a spokeswoman for the Onslow Water and Sewer Authority.

ONWASA had plans at the time to build the NorthWest Regional Water Reclamation Facility just south of Richlands. Seeking an area to use for treated wastewater disposal, ONWASA condemned about 200 acres of land along Gum Brand Road belonging to Sue Boggs, Hubert Rogers and members of their families, according to court documents.

Prior to the settlement, ONWASA tried unsuccessfully to dismiss its eminent domain lawsuit and abandon the portion of the property with mineral deposits. The authority demanded a return of the money it had given land owners during the 2008 condemnation.

Autry pointed out in a motion to block the dismissal that state eminent domain laws, upheld by the Supreme Court, do not allow condemnation actions to be dismissed by a plaintiff once property titles have changed hands. In other words, the government cannot force a previous land owner to take repossession of property taken through eminent domain procedures.

The former owners were paid market value for the property — around $1 million — in April 2008. In 2010, they filed an answer to the condemnation lawsuit claiming that limestone beneath their former parcels could have been mined for profit.

ONWASA’s geological experts appraised the value of the limestone deposits at $6 million, and the $7.5 million settlement was worked out earlier this month.

ONWASA said the eminent domain action was necessary in mid-2008 because the N.C. Department of Environment and Natural Resources issued a special order of consent that mandated that the authority build a new wastewater treatment facility.

The wastewater plant — pushed publicly by then-Richlands mayor and chairman of the ONWASA board of directors Marvin Trott, who died in January — has not been built.

Initial bids for the facility came in way over budget and now the project is being re-designed, Zavala said, adding that the facility is scheduled to be operational by the end of 2014.

ONWASA board members are doubtful the facility will ever be built, according to a high-ranking ONWASA official speaking on the condition of anonymity because he is not authorized to speak publicly about the situation.