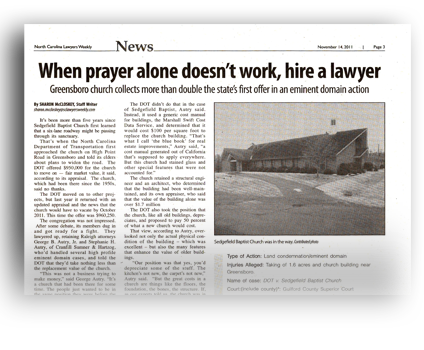 It’s been more than five years since Sedgefield Baptist Church first learned that a six-lane roadway might be passing through its sanctuary.

That’s when the North Carolina Department of Transportation first approached the church on High Point Road in Greensboro and told its elders about plans to widen the road. The DOT offered $950,000 for the church to move on – fair market value it said, according to its appraisal. The church, which had been there since the 1950s, said no thanks.

The DOT moved on to other projects, but last year it returned with an updated appraisal and the news that the church would have to vacate by October 2011. This time the offer was $960,250.

The congregation was not impressed. After some debate, its members dug in and got ready for a fight. They lawyered up, retaining Raleigh attorneys George B. Autry, Jr. and Stephanie H. Autry, of Cranfill Sumner & Hartzog, who’d handled several high profile eminent domain cases, and told the DOT that they’d take nothing less than the replacement value of the church.

“This was not a business trying to make money,” said George Autry. “It’s a church that had been there for some time. The people just wanted to be in the same position they were before the taking; ·they wanted a similar property in a similar location with a similar church. And $960,000 just wasn’t going to get that.”

By the church’s estimates, the land and buildings were worth more than twice that amount.

Valuing a church, it turns out, is not like valuing a house. To the DOT, Sedgefield Baptist Church was just another structure on land it needed to plow through, and assessed it as such. But to its members, its intrinsic value was much more.

The DOT didn’t do that in the case of Sedgefield Baptist, Autry said. lnstead, it used a generic cost manual for buildings, the Marshall Swift Cost Data Service, and determined that it would cost $100 per square foot to replace the church building. “That’s what I call ‘the blue book’ for real estate improvements,” Autry said, “a cost manual generated out of California that’s supposed to apply everywhere. But this church had stained glass and other special features that were not accounted for.”

The church retained a structural engineer and an architect, who determined that the building had been well-maintained, and its own appraiser, who said that the value of the building alone was over $1.7 million.

The DOT also took the position that the church, like all old buildings, depreciates, and proposed to pay 50 percent of what a new church would cost.

That view, according to Autry, overlooked not only the actual physical condition of the building – which was excellent – but also the many features that enhance the value of older buildings.

“Our position was that yes, you’d depreciate some of the stuff. The kitchen’s not new, the carpet’s not new,”

Autry said. “But the great costs in a church are things like the floors, the foundation, the bones, the structure. If, as our experts told us, the church was in great condition, it would be there as long as the people wanted it to be there.”

And contrary to the DOT’s position, some older buildings actually appreciate over time. The church’s structural engineer pointed out that a large number of churches appear on the National Register of Historic Places. “Not only do they tend to be well-maintained, “Stephanie Autry said, ”they also don’t have to be changed for people to like them. Lots of times people like them because they are old and traditional.”

Shortly before the Oct. 1 deadline, the parties agreed upon a settlement of $2 million and the church members found a new home on Dillon Road. They took their pews and stained glass with them.

DOT counsel Hilda Burnett-Baker did not return a call for comment.